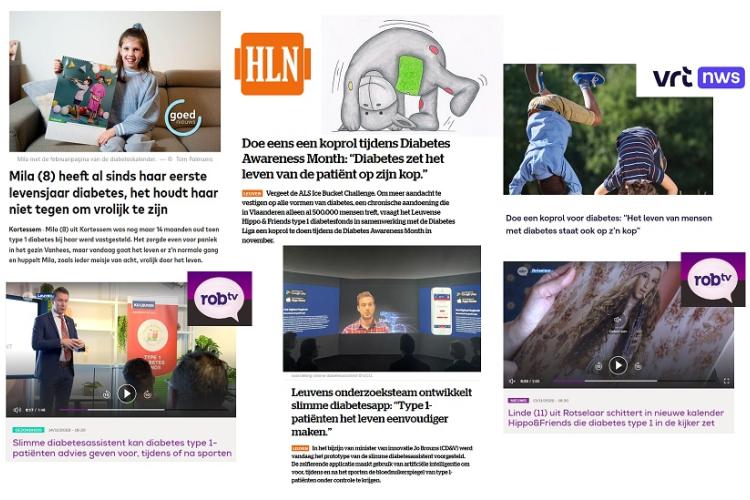 Each year Hippo & Friends develops a photo calendar in which we put children with type 1 diabetes in the spot lights. No less than 15 children shine in the 2023 photo calendar in 13 concepts, conceived and photographed by Studio Diewke.

'ROB tv' made a beautiful report about the photo calendar and spoke with Linde, one of the models.

Do a foward roll for diabetes

How do we reach many people and bring all forms of diabetes to the attention. Such a thinking exercise is not easy. We came up the low-threshold and playful campaign 'do a forward roll for diabetes'.

We are extremely proud of this campaign. Several well-known Flemish people, politicians, schools, children and adults shared their forward roll during the month November.

Colleague Dieter was allowed to tell Radio 2 of VRT more about the forward roll for diabetes on World Diabetes Day.

HLN region also shared our campaign and Rani Deconinck and Raf Van Brussel did a forward role in the studio of Joe FM.

An app that gives people with type 1 diabetes advice before, during and after exercise. Researchers from, among others, UCLL University of Applied Sciences and KU Leuven are working on this. Npo Hippo and Friends is a proud partner of this project.

Based on data from a sports watch and a food diary, the app gives tips to athletes with type 1 diabetes. A prototype of the app was presented at World Diabetes Day at Health House in Leuven.