The testimonial of
Snowflakes in January - Jillian Angermeier 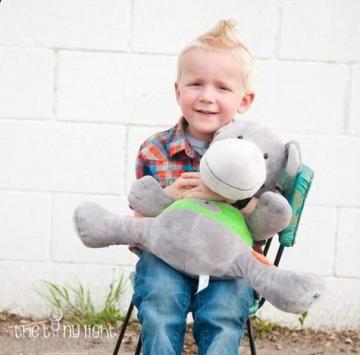 Jillian's son, Hudson, was only 3 years old when he was diagnosed with type 1 diabetes.

It’s the way the weather turns, when the sky turns grey, when the howling fingers of the wind brings me back to that place.

Reminding me of the feelings of being trapped as if in a snow globe.

The swirl of beauty in the midst of chaotic winds, with the storm thrashing and pulling me in all directions.

Blizzards: violently beautiful. A calm chaos that blinds our sight. This describes our life now.

“They” say “Be careful what you name your children, because they will live up to their name.

” Who are “they?” because, I would like to ask them how they would react seeing their son living up to the meaning of being a “strong and courageous promise.”

If “ they” would be able to stand without crumbling and shattering into a thousand pieces as their son cries out for you as he’s being held down in a
cold hospital room in order to get an IV and insulin injected into his tiny form.

Not yet 3 years old.

How would “they” react to being told that your sweet boy who carries light and life in every single smile and giggle, had an incurable disease that would now be haunting the back of your mind day and night?

Would “they” crumble under the weight of it all? or would “ they” rise to the occasion?

It was New Years Eve.

We should have been celebrating as a new family of 4 together, but instead, the boys were downstairs where our son was sick with what we thought was the flu.

Upstairs, we were trying to keep our 3 month old baby girl separate from her brother in case she caught what he had.

If I had known that this was the night that Hudson’s life would change forever, I wouldn’t have cared if we were snuggling together as the winds howled.

If I had known that this was the night that his life was changed forever and that he was now in danger… I would have stopped time.

At the stroke of 12, as the light of a New Year dawned, the beginning our our new lives awoke.

The storm had ceased around us, but little did we know that we were walking into the eye of a new storm.

Every blizzard takes me back.

It takes me back to the silent battle we were obliviously witnessing.

If I could, I would.

If I had known, I would have risen up.

If I could have stopped the countdown to a New Year and shattered the dropping ball, I would have.

We control how we process our thoughts because they become our outcome.

We can choose to live in fear of the disease and sit in the dark or we can choose to stand tall, with shoulders back and take it on one day at a time.

We can choose to look at these Snowflakes as a Blessing rather than a reminder of “ that time.”

Because in the blink of an eye, this could all vanish.

Our blessing is those who watch the snowflakes fall around us and choose to stand beside us and take it on with us.

The good. The bad. The ugly. The unpredictable.

From the moment we stood in those halls as our son’s cries echoed down the corridors, my husband and I walking just far enough away so we could vaguely hear his pleas tearing at the inner parts of our soul, we vowed to each other that we would never once let this disease control who our son was meant to be.

It would never once rob him from the childhood that was waiting for him outside these walls.

He was first a child.

And then a Type 1 Diabetic second.

Never once the other way around.

We never wanted him to worry or live in fear of the disease, but to stand brave and strong and let us do the worrying for him.

Giving him the freedom that was robbed from him.

To allow him to rise.

To watch him break barriers.

To stand proudly and watch as the 5 year old him spoke in front of Doctors and Scientists.

If I could have, I would have taken it from him.

If I could have taken the hourglass and shattered it before time slipped into a New Year, I would have.

It would have changed the way his life has impacted both his peers and complete strangers.

It would have changed who he was meant to be all along.

A Strong and Courageous Promise.